This video makes us want to travel to the northern corner of this great province.

Last Frontier Heliskiing has come up with another fantastic video illustrating what makes them awesome. I mean come on, the largest terrain in the world! Who doesn't want to go explore that? There is a shot near the end of the video that zooms out and gives you a pretty good idea on the massiveness of their terrain..and that is just one area! On their website they say the make the most out of every run. Dropping you off at the highest possible point the alpine and ending near the bottom of the valley in the trees. You get big open powder fields, bowls full of deep northern fluff, tree skiing amongst large northern evergreens and terrain features to play on everywhere.

We hope you enjoy this little teaser for Last Frontier Heli Skiing as much as we did. Maybe you will even book a trip and get up there this season. If you do, tell them we sent ya!

PS - Check out the massive cheese wheel at around 2:30 in the video....awesome!

Jason from Stellar Heliskiing sends us a teaser from his GoPro collection.

We woke up to this video in our inbox this morning. It is no doubt a late night, powder obsessed creation from Stellar Heli Skiing owner/operator Jason Remple. We can just picture Jason going through all his GoPro footage from last season trying to choose the best footage to get us salivating for some turns in the epic Selkirk and Purcell Mountains of BC. We get the feeling that this is just the first of many pre-season videos from Jason and the crew at Stellar Heliskiing!

We had the pleasure of being guided by Jason last season and had one of the best back country experiences of our lives!

A short film by Jordan Manley

When I saw this video pop up we had to post it. Jordan Manley is a renowned photographer whose photos have graced the pages of major outdoor sports magazines such as Powder and Bike. Now it looks like he is producing some equally sweet videos. This one will definitely make you want to go visit Great Canadian Heliskiing. Nice work Jordan.

Now you can Heli Ski from Silver Star Resort

Eagle Pass Heli-Skiing and Silver Star have joined forces to offer that once in a lifetime experience, right from the resort. Silver Star is the first resort in the interior of BC to offer heli-skiing to to their guests!

Starting for the 2011 – 2012 season, Eagle Pass will have a Bell 212 helicopter stationed at Silver Star allowing guests to pre-plan or take advantage of a last minute opportunity. The 212 will take 10 skiers and 2 professional certified guides from Silver Star’s quaint village to the amazing Gold Range in the Monashee Mountains.

Do you want to ski how Mark Abma skis or WHERE he skis?!

It's never too far or too deep when we are talking powder!

Growing up a skier here in British Columbia you hear the stories about the legendary powder dumps up in the north coast ranges. More specifically in the Terrace area. I even remember tales about local resorts fibbing on their snow reports because people wouldn't believe that they actually had that much snow. When I saw this video teaser summing up the 2011 season at Northern Escape Heli-Skiing I definitely starting thinking that this may have to be the year to get up to Terrace and search out some legendary turns myself.

Norther Escape Heliskiing is located a short 20 minute drive the the Terrace airport and there are flights that leave daily from Vancouver. So accessing this remote, wild, and deep area of BC isn't has difficult as it may look at first glance. With all the rumors of back-to-back La Nina seasons we suggest that this be the season you go check it out too. Hey, maybe we'll see you up there! 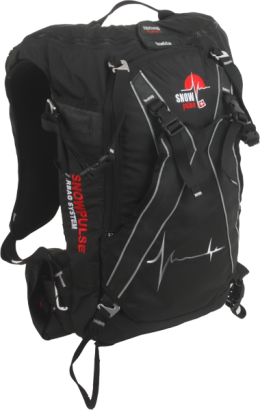 The Avalanche Airbag Backpack or Avalanche Flotation Device (AFD) has been around for many years, but only recently have they been incorporated into commercial heli-skiing operations. There are many reasons for this, but one of the single most important is that the Ministry of Transport has only recently approved the cylinders for transport in commercial aircraft, i.e. helicopters.

Recently I was speaking with a renowned engineer that designed the avalanche transceivers we use, the BarryVox Pulse, about the “new” avalanche airbag backpacks or AFD’s and the efficacy of their use in the heliskiing industry. His answer astounded me as he is responsible for designing one of the most sophisticated avalanche transceivers on the market; he said “if I had a choice of wearing only a transceiver or only an AFD, I would choose the AFD”

That’s a very strong statement and I had to think about it for a minute, putting aside my 30+ years of indoctrination with transceivers, before I could see his point. One device, the transceiver, helps you be located if you’re buried in an avalanche and the other, the AFD, decrease your chances of being buried if you’re caught in an avalanche.

Now, these devices are not infallible and in fact may increase risk in specific situations, but then again so do seatbelts in your car and ski helmets.

Northern Escape Heli-Skiing has been including AFD’s, the Snow Pulse Airbags, as part of their risk management program for two years now and we are very happy with the results. Heliski guests are issued a transceiver and an AFD which also carries a shovel and probe. Each group also carries a handheld radio to communicate with guides and pilots. They receive instruction and practice the use of each prior to skiing/riding with us.

However, even when utilizing the latest in technology, there is still no substitute for avoiding avalanches in the first place.

Powder U at CMH Heliskiing

Curriculum at Powder U will include all the courses any skier could dream of (and probably did) in academia.

The company that invented Heli-Skiing almost 50 years ago, CMH Heli-Skiing is now taking skiers “back to school” with the launch of Powder U @ CMH for the 2011-2012 ski season. Led by “Dean” Roko Koell, UIAGM and Professor of Powder, the curriculum at Powder U will include all the courses any skier could dream of (and probably did) in academia:

Check out Stellar Heliskiing for your next heli experience.